This is belated, but I had to reflect on the many points of information shared at Ignite this year. So much that Microsoft had to delay the launch of Dynamics 365? Well maybe… I think it is awesome that AXUG Summit is used as a platform for releasing Dynamics 365. 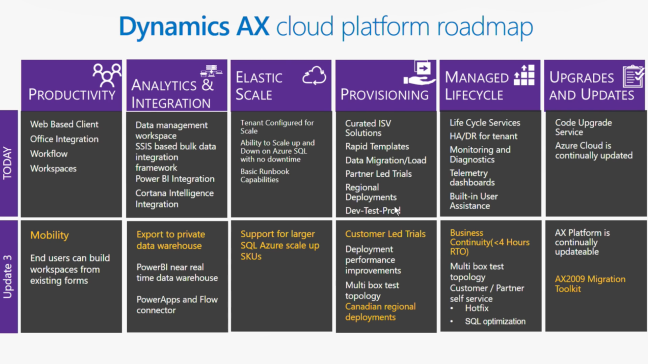 The keynote from Satya Nadella didn’t mention AX, but it is clear that AI is a major focus area and will be more and more introduced as a part of the Dynamics processes and work as decision accelerators. AX will use Cortana analytics for Product suggestions in Retail and Product forecasting at first, but I think we’ll soon see a lot more areas supported by this.
And talking about the analytics part… Did you know that with the new hardware Microsoft would be able to translate the ENTIRE English Wikipedia library to another language in half the time it takes a human to blink?! Around 100 milliseconds. Try putting that power behind your forecasting and decision making. 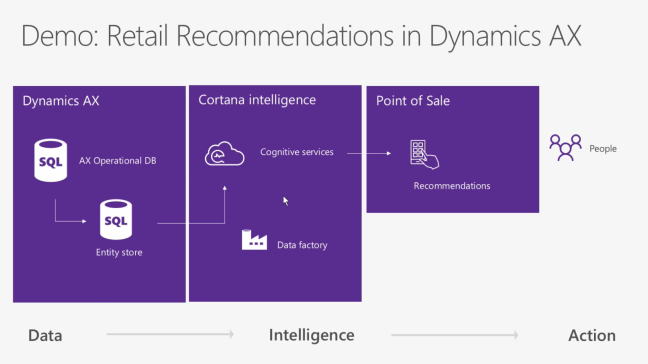 Arif Kureshy and Arjit Basu had a fantastic session on the road map. This really was in the spirit of the new Microsoft where current and near-future feature development was disclosed. If you have one hour, I suggest using it on this video…

Localization
Mike Ehrenberg talked about the localizations approach. GER (General Electronic Reporting) is a new tool that solves the export of files and documents and will cover both reporting and electronic integration scenarios. You can through LCS now subscribe to updates to localizations and the install process is being improved and automated.

Retail news
The retail app is launched for iOS and Android and a hardware solution (“Scale”) has a POS and an offline on-prem server functionality. In addition to the advanced warehouse solution that is meant to cover the processes for warehouse wholesale stores like building material and equipment stores/warehouses. 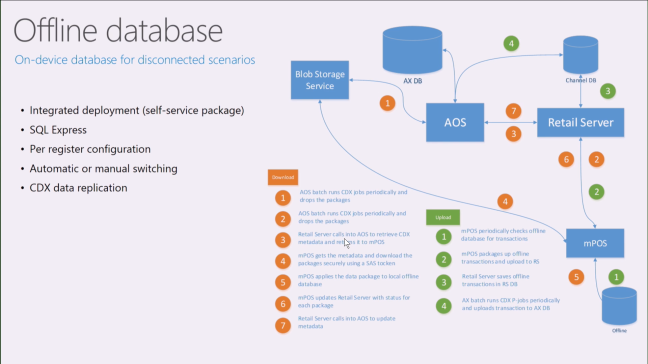 Data independency
Data centers are to open in Canada and Germany. The German will even be governed by Deutsche Telecom and the be subject to German law. I’ve heard rumors of a similar case for China. Data will also be able to encrypt at rest by customer owned keys.

Integrating, Reporting and Entities
The AX operational database is getting more and more unreachable (which is mainly a good thing) and interaction with data is now to be done through two replicated databases. One almost real time (seconds delayed) and one Entity store (minuted delayed). The entity store is currently around 1800 entities, mostly master data and parameters. There is a focus on creating more transactional ones in the near future. A Data entity wizard and script (for automated creation) will be available soon. 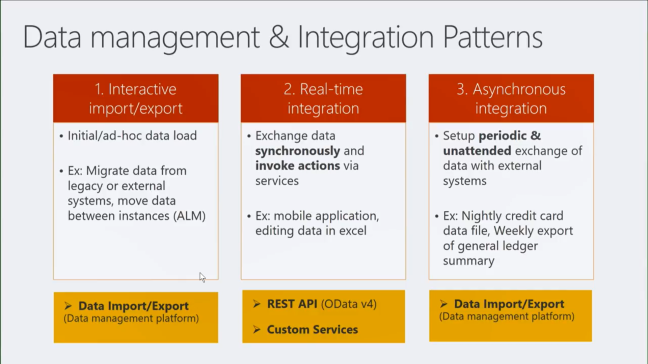 Upgrade and on-boarding story
Migration tool for AX 2009 is in preview now and will be public this year. Upgrade path for AX 2012 is to be released early next year. The on-boarding process will be continually updated and they showed quite a lot of large companies world wide running AX7 with an on-boarding of ONLY 60-90 DAYS!

Mobile app
The Mobile app is finally revealed! An iOS, Android and Windows phone app with offline features that users can build them selves through a guided experience in the HTML 5 client. Extendable through Javascript and with access to local resources like camera and GPS.

Trial-as-a-service
A new trial-as-a-service was shown where potential customers get a company of their own in seconds with a restricted application feature set available. Partner recommendations will be there and a potential customer can HIRE partners to do demos. This will also be available for third party applications and the Dynamics App source will have partner recommendations, so customers can find an integration partner with knowledge of the solution quickly. 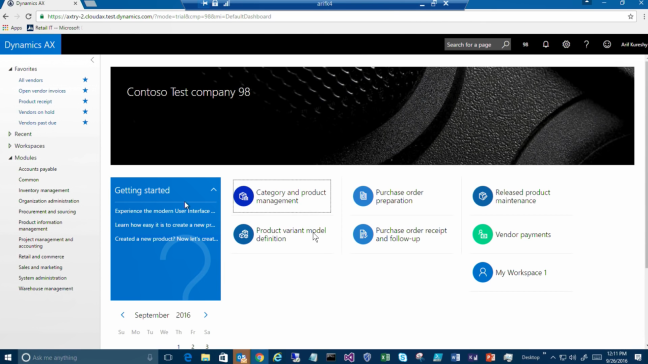 Other cool stuff
Customer self service is put on the road map!
AX – CRM connector is coming at the end of the year!

And there is more…
All in all a lot of information… But the also continuously referred to the Launch on 11.October. This will be the launch of Dynamics 365 and also the hybrid cloud story will be unveiled. Check it out by going here: http://www.axugsummit.com/

Everything AX and more...

A Microsoft Dynamics AX Podcast about everything AX, ERP, BI, Microsoft and more. For partners and customers alike...

The opinions and views expressed in this blog are those of the author and do not necessarily state or reflect those of Microsoft, my employer