Microsoft Dynamics AX 7 is being released today and I want to take some time to honor and reflect on the roots of this magnificent ERP solution. I’ve tried to color tag some elements of application, technical or global impact. I hope you enjoy reading it.

We have to go back to 1983. Michael Jackson with Paul McCartney and The Police are at the top of the charts, the TV series M*A*S*H airs its final episode, Richard Stallman develops GNU, Microsoft releases the first version of Word and Compaq releases the Compaq Portable.

Brothers Preben and Erik Damgaard founded Damgaard A/S with the purpose of creating a computer based accounting software.

In 1986 they released Concord Finance (Later named C4). The resellers and customers were able to do improvements to the code to tailor the solution to their needs.

In 1991 they released the Concord XAL business application based on the XAL Developer environment. Concord XAL had an open source code that made the resellers and customers able to create improvements, verticals and modules. Concord XAL quickly became the standard accounting software for Danish market and got foothold in many other countries.

In 1994 “Big Blue” IBM and Damgaard partner 50/50 to create Damgaard International A/S to focus on the international markets.

Concord crossed the millennium with a world wide customer base of over 75.000 installation in 29 countries. Read more here.

It is 1998! Britney Spears is asking you to “Hit her one more time” and Will Smith is “Gettin’ jiggy with it“, the silver screen shows Armageddon and Saving Privat Ryan, US congress passes the Digital Millenium Copyright Act, Microsoft launches Windows 98 and in March this year IBM and Damgaard release “IBM Axapta” for the US and Danish markets.

The first version of Axapta was mainly based on the Concord XAL business processes and covered Financial, Trade, Inventory management, Logistics and Production. It was created on a new and exciting object-oriented  technology and was intended for midsize companies. It ran for the most part on Windows NT servers with Microsoft SQL Server 6.5, but also supported Oracle databases.

In November the same year, version 1.5 is released with support for Norway, Sweden, Germany, UK, Netherlands, Austria, Switzerland, Belgium and the European Union. Service pack technology is introduces along with Publishing manager and support for MSSQL 7.0. Damgaard buys out IBM and get exclusive rights for the Axapta software and brand.

Version 2.0 of Axapta is released in July 1999 and brings with it the Project Accounting module, Warehouse Managment (WMS) module, ActiveX support, Open pack concept, COM-connector and the early version of the Axapta Object Server which was used for offloading tasks from the client to the server for processing.

The Millenium passes without any major issues and a lot of happy IT consultant receive their paycheck with a nice overtime bonus. Axapta 2.1 is released in January 2000 with support for the German, Austria, Switzerland and Spanish market. The first WebApp is created. The Customer Self Service  which grew in to the Enterprise Portal. Axapta 2.1 also supported Microsoft SQL Server 2000 with database log.

In December 2000 Axapta 2.5 is released with improvements (ESS) to the Project module and a new Banking module. It had a full web application development environment and supported internal OLAP.

The “Market Pack” for Axapta 2.5 was released October 2001. It introduced the French and Italian markets and had the CRM module with the Commerce gateway. It also introduced the Product builder.

It is 2002! The movie franchises of Lord of the Rings, Harry Potter and Men in Black all release their sequels, Eminem and Shakira sold most singles, The €uro replaces twelve countries currencies and NASA finds water on Mars. Microsoft buys Navision A/S in June this year and it joins among others the ERP solution Great Plains to make up Microsoft Business Solutions.

Microsoft releases Microsoft Axapta 3.0 in October 2002. It supported 17 countries (including Canada) when launched. The security model was renewed, license configuration was introduced along with Enterprise Portal. The Demand planner and inter company functionality was added.

With the new brand name in place, Microsoft Dynamics AX 4.0 is released in March 2006 with a brand new Service management module. The AOS as a true Windows service, CLR interoperability and the .net connector was introduced. It also supported full Unicode for the first time and the Application Integration Framework saw the light of day.

The user interface was redesigned for the main menu to fit the default Microsoft application layout. The general form layout stayed the same with grids and menu buttons to the right. The login screen disappeared as AD authentication was added.

In the leap year of 2008 the Lehman brothers corporation goes belly up, Beyonce urges you to put a ring on it, Barrack Obama is elected the 44th President of the US, almost 11 thousand athletes travel to Beijing to compete in the Summer Olympics and in June this year Microsoft release Microsoft Dynamics AX 2009 (Version 5.0). It introduced the navigation bar, area pages and list pages to get the Office look and feel. This release brought A LOT of new features to the generic application and many of the different modules like the Global adresse book, Multisite functionality and Expense management to name just a few. There was a new Compliance module and the Role center for self service BI was introduced.

It was also a MAJOR technical update with a lot of Microsoft technologies being introduced. Workflow based on WCF, the reporting in SSAS/SSRS, Role centers based on SharePoint and X++ supported MS SQL statements. Batch server, Load balancing, AD import wizard, Code versioning control and many many more technical upgrades were in place.

Microsoft Dynamics AX 2012 (Version 6.0) released in September 2011 for 25 countries in 23 languages. The biggest release of AX thus far and introduced many changes and improvements both on the technical and application aspect of it and I can only list a few here, but you’re welcome to go and read all about the changes here.
Most profoundly for the end users was the changes in form design with ribbon menu, action panes, fact boxes as well as the experience of only using SSRS for printing as the X++ reporting solution was available, but to be deprecated. Role centers were improved and the modules got rearranged a bit introducing modules like “Sales and marketing” and “Procurement and sourcing“.

The licensing module was completely revised. It opened everyone to the entire application and licensing the users security access level instead of the functional modular way of the past. This meant customers could implement a broader set of features and would often look at and implement new functionality once discovered or required.

Building on the model of the global adresse book. There where many more global entities introduced like organization, workers and items that required a whole different way to interact with the application. You could for instance now not simply copy a company (now legal entity) anymore. Major changes where done to the database structure to support a “metadata” based model. General ledger, HR, Inventory managment was fundamentally redesigned.
A new product configurator was introduced based on the Solver foundation and so much much more.

On the technical side of things code was running in .Net (CIL) and the development environment was in a separate window. Many other changes appeared like the Role based security, a new Help system, Analytics in SSAS and redesign of the AIF to name a few.

The root for Life cycle services was also released. Rapid Configuration Service was introduced for the US market.

The AX 2012 party didn’t end there… During the next 5 years the application would grow immensely introducing more modules and even architectural changes.

The “Feature pack” for AX 2012 was released early 2012 and included the first version of the Retail module.

Microsoft Dynamics AX 2012 R2 was released in December 2012 which intailed database splitting and partitioning, new BI cubes and Retail e-commerce and many improvements to the existing business logic and processes. Role centers supported Power BI and got a nice face lift. Many modules got big upgrades like the Project module.

Microsoft released many cumulative updates for R2 in the following years, both increasing functionality and features.

Companion applications where created to bring AX in to the Windows 8 eco system.

On May 1 2015 the Microsoft Dynamics AX 2012 R3 was released with a wide range of new modules, Warehouse management and Transportation management being most prominent. Existing modules got a major overhauls as well; The Retail module got impacted the most. There was also many system upgrades as well like Azure deployments, Cloud support and even more BI cubes.

Welcome to the future

That brings ut to today. March 9th 2016. Justin Bieber has three singles in the US Top 40. The animated Zootopia, London has fallen and Deadpool tops the Box office, we say goodbye to Ray Tomlinson the creator of e-mail and billionaire Donald Trump is on his way to becoming the 45th President of USA.

Satya Nadella has turned the Microsoft super tanker on a sorely needed new coarse. A more transparent and engaged company will today introduce a paradigme shift in the ERP world. Living up to Nadellas “Cloud first-Mobile first” mantra, the new version of AX (Version 7) will be just that. 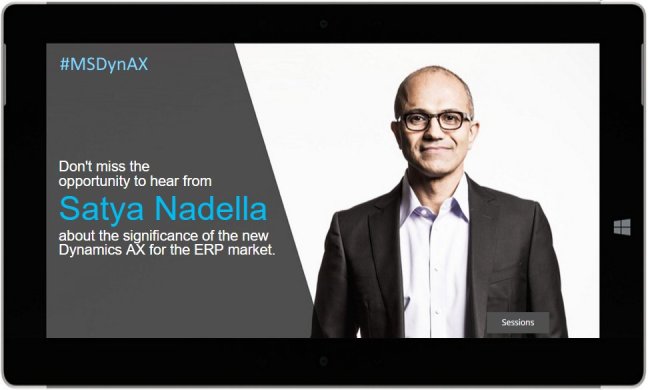 I will be up in the early hours of the night here in central europe to follow this event. I hope you will join me.

8 thoughts on “History of AX”

Everything AX and more...

A Microsoft Dynamics AX Podcast about everything AX, ERP, BI, Microsoft and more. For partners and customers alike...

The opinions and views expressed in this blog are those of the author and do not necessarily state or reflect those of Microsoft, my employer